Ultimate Big Chill is the evolved form of Big Chill.

Ultimate Big Chill's appearance is drastically different from his unevolved counterpart. However, like said counterpart, his appearance is extremely similar to that of the Mothman. He is slightly hunched. His wings have changed shape to be somewhat like a bat's, and have black and aqua patterns. He has blue and aqua patterns on his arms from his wrists, up around his shoudlers, connecting the patterns of both arms. His hands are blue with aqua fingers. His blue and aqua patterns are on his legs as well. His head has changed shape, with his mouth resembling the mouth of a bug and being light blue, and he has completely circular, compoud eyes. He wears the Evolved Simplicitrix symbol on his stomach.

Negative Ultimate Big Chill is a dark orange-brown color with light orange patterns on his body. 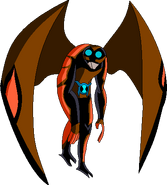 Negative Ultimate Big Chill
Add a photo to this gallery

Retrieved from "https://thealan10adventures.fandom.com/wiki/Ultimate_Big_Chill?oldid=3514"
Community content is available under CC-BY-SA unless otherwise noted.