Spidermonkey is an alien with four arms, three pairs of red eyes, two legs, three fingers on each hand and three toes on each foot, orange fur over a brown center, and a tail with two stripes near the tip. Spidermonkey's hair is flipped up, and he wears two red sashes going across his chest. The fur on his head has stripes. He wears the Simplicitrix in the center of his sash.

Richard as Negative Spidermonkey looks exactly like Spidermonkey. However, his fur is blue. He wears white sashes that surround his Simplicitrix.

Emo Spidermonkey has dark blue fur, and dark blue skin. He wears a tan Simplicitrix on his chest between his brown sashes. 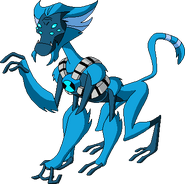 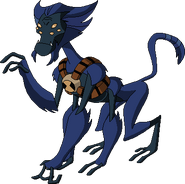 Emo Spidermonkey
Add a photo to this gallery

Spidermonkey's dragon name is Loxbodein, which can be broken up into "Lox Bo Dein," meaning web move keep.

Retrieved from "https://thealan10adventures.fandom.com/wiki/Spidermonkey?oldid=5430"
Community content is available under CC-BY-SA unless otherwise noted.