Start a Wiki
The Simplicitrix was the device used by Alan Nomaly in The Alan 10 Adventures. Richard Nomaly uses a negative version of the device. It was created by Dr. Gearo Morphanewal.

The Simplicitrix was a watch-like device. It is black in color. It had two red stripes along the borders. On the faceplate, the stripes made an hourglass-like pattern. It had 3 small red stripes on either side of the faceplate. When the faceplate popped open, the core was a red hourglass and has red circuits on the sides.

The Simplicitrix had the ability to transform the user into a number of alien DNA samples. This was done by selecting a transformation, and pressing down on the core. Alan's Simplicitrix did this with a holographic wheel, and Richard's does this with alien icons. This was later changed to be full body holograms for both users. The user can also switch from one alien to another by pressing the symbol, or by simply thinking about it. When in a transformation, the user can access almost if not all of the powers of the species they have become.

A combination of Pyrrha's unfamiliarity with the device, Alan not gathering all the pieces, and Alan rushing right into battle caused the rebuilt Simplicitrix to have an unintentional feature. The DNA of its unlocked species began leaking into Alan's human form. Initially, it was caused by his own emotions and seemed to be random. However, during his fight with Adam Taurus, Alan seemed to be able to utilize the powers more efficiently and control which alien he was using the powers of. The current side effects of this unintentional function are currently unknown.

As of O' Brother, What Art Thou, Richard's Simplicitrix has the ability to use Ultimate Forms. As of Alan 10, Alan's could do the same.

Ultimate Forms take the DNA sample someone is currently in, and puts it into a simulation of a worst case scenario. This then evolves the DNA sample, fixing its flaws, and turning its strengths more powerful. 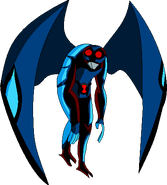 Ultimate ChamAlien
Add a photo to this gallery

When using the Enhanced Feature, the Simplicitrix's core is flashes yellow. The transformation the user is using at the time of activating it will get rocky armor, and parts of their body will become yellow energy. They will also gain extra bodily constructs made of the rocky armor that usually are held together by the yellow energy.

Enhanced Anenemy
Add a photo to this gallery

Most Simplicitrix transformations have clothing. The color of this clothing is dependent upon the user. In Alan's case, his transformations primarily have black and red from his jacket, with some having the dark grey of his jeans, and the brown and tan from his boots.

The location of the Simplicitrix when in transformation was seemingly random.

There are also some rarer placements, and even ones unique to specific aliens:

Some aliens have had the symbol move:

Retrieved from "https://thealan10adventures.fandom.com/wiki/Simplicitrix?oldid=5584"
Community content is available under CC-BY-SA unless otherwise noted.