Jetray is a yellow, humanoid, manta ray like alien with two black lightning bolt-like stripes coming down from his shoulders to his Simplicitrix symbol. Jetray has pinkish-red horns extending from his nose, gills underneath his arms and pinkish-red patagia which he uses to fly and glide through water.

Negative Jetray has blue skin, with green wings and horns. He wears the Negative Simplicitrix symbol on his chest.

Emo Jetray has faded red skin, with faded yellow wings and horns. He wears a tan Simplicitrix symbol on his chest. 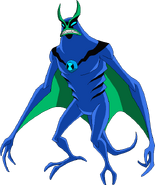 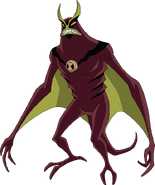 Emo Jetray
Add a photo to this gallery

Retrieved from "https://thealan10adventures.fandom.com/wiki/Jetray?oldid=6026"
Community content is available under CC-BY-SA unless otherwise noted.