Gutrot is the Simplicitrix's DNA sample of a Gastulence (also known as an Egetsapien) from Gasceomestry. He debuted in Learning the Ropes, and is voiced by Rob Paulsen.

Gutrot has the appearance of a mechanical humanoid in a black outfit with red highlights, with the exception of his head and shoulders being a bluish-purple color. He has four fingers on each hand, which are apparently gloved with red gloves. He has silver nozzles/openings, from which he can eject gas. He has two on both of his arms, one on each of his shoulders, three on the rim in between his shoulders, three on his head, and one on his back. He has a belt with a window on his stomach so that the gas he uses can be seen. Gutrot wears the Simplicitrix symbol on what appears to be some kind of gas mask in front of his mouth.

Alexis' Gutrot looks similar to Alan's however her skin is is light blue. She has red nozzles on her shoulders, arms, legs, hands, and sides of her head. Her outfit is black. She has a black collar with red stripes on the top and bottom, black gloves with red fingers, and the red metal on bottom of her shoes. She has blue eyes, nozzles, and container. She has blue Simplicitrix with a red panel on her collar.

Negative Gutrot looks almost identical to Gutrot. However, his skin is green, his nozzles, collar, and stripes around the window on his stomach are white, and he has white on his outfit where Alan's has red. His nozzles are aqua in the center, as well, and his window is tinted blue. He wears the Negative Simplicitrix as a gas mask.

A version of Gutrot was released that is currently known as Greentrix Gutrot. His skin is a grey-purple. His outfit is mostly black with yellow highlights and green details. His nozzles are bronze. The window on his stomach is green. He has green eyes. He wears a green Simplicitrix with yellow paneling as a gas mask.

Gutrot has a cynical sense of humor and speaks with a gruff tone. 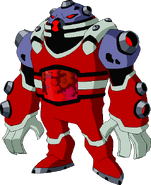 Gutrot's dragon name is Kosuftir, which can be broken up into, "ko suf tir," meaning inside gas outside.

Community content is available under CC-BY-SA unless otherwise noted.
Advertisement