Four Arms is the Simplicitrix's DNA sample of a Tetramand from the planet Khoros. He debuted in Alan 10.

Four Arms is a humanoid alien that is approximately twelve feet tall, has well developed muscles, two pairs of four-fingered arms, and purple skin. A black stripe goes from his chin to his lower lip, and he has four red eyes: a main pair, and a smaller pair below them. Four Arms wears a black T-shirt with a red line going down it, red pants, and fingerless gloves. The red line going down the middle of his shirt extends around the collar, down the shoulders, and around the ends of his sleeves, which are only on his upper arms. He wears black boots. He wears the Simplicitrix symbol on his left shoulder.

From Season 2 onward, Four Arms has a drastic redesign. His body is more proportional, and his muscles are more evenly distributed throughout his body. He has a ponytail on the back of his head attached to his forehead stripe. His outfit is also changed. He wears brown metal sashes on his chest, which are in an X-formation that cross on his back and on his chest, under the Simplicitrix similar to the sashes worn by Spidermonkey. He wears a dark grey, metal belt which has tan borders, and black pants. He has anklets and bracelets with the same pattern as his belt.

Richard as Negative Four Arms has the same appearance as Four Arms. However, his skin is green, his outfit is black and white, his eyes are aqua, and he wears the Negative Simplicitrix on his left shoulder. 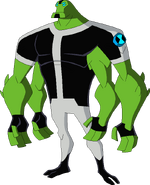 Negative Four Arms
Add a photo to this gallery

Four Arms' dragon name is Mulyenbaag, which can be broken up into, "mul yen baag," meaning strong arm punch.

Retrieved from "https://thealan10adventures.fandom.com/wiki/Four_Arms?oldid=5689"
Community content is available under CC-BY-SA unless otherwise noted.