Extermigator is the Simplicitrix's DNA sample of an Arwaffian (also known as a Serpesapien) from the planet Rüstung Marsh. He debuted in The Annihilators Part 2.

Extermigator is a humanoid crocodilian-like creature. His skin is covered in greenish-grey scales, while his back and tail have brown scales sticking up from his body. His entire body is extremely muscular. He wears a sleeveless, black jumpsuit that goes down to his knees. The Simplicitrix resides on his right pectoral.

Negative Extermigator is purple, and his outfit has white. 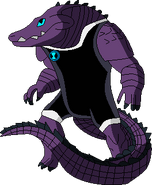 Negative Extermigator
Add a photo to this gallery

Retrieved from "https://thealan10adventures.fandom.com/wiki/Extermigator?oldid=4223"
Community content is available under CC-BY-SA unless otherwise noted.