Clockwork is the Simplicitrix's DNA sample of a Chronosapien (also known as an Annosecundus) from an Tempparatus. He debuted in Learning the Ropes, and is voiced by Nolan North.

Clockwork is a robot-like alien with skin that is made of a magenta-colored material, with black stripes and a transparent piece of red circular glass on his chest, revealing gears inside of him. Clockwork has a large body and holes on the protrusion on his head. On his back, he has a black stripe that splits into two stripes with a keyhole between them. The Simplicitrix is located on his gears.

Negative Clockwork looks almost identical to Clockwork. However, his body is made of a teal-colored material, and his gears are covered in a teal glass. The Negative Simplicitrix is located on his gears. 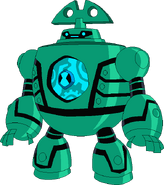 Negative Clockwork
Add a photo to this gallery

Clockwork's dragon name is Tiidnelsein, which can be broken up into, "tiid nel sein," meaning time fast slow.

Retrieved from "https://thealan10adventures.fandom.com/wiki/Clockwork?oldid=6048"
Community content is available under CC-BY-SA unless otherwise noted.