Cannonbolt is a hulking, broad-shouldered alien covered in natural, purple armor plating on his back, shoulders, and the backs of his arms. He is mostly lavendar, with black on his upper half. He has four claws on both of his hands. He has two armor plates on each arm, one on each leg, and three on his back. He has a black stripe on his chest that comes from his back to right under his lips, and wears black pants that go around the stripe under his arms, and black gloves. He wears the Simplicitrix on his forehead.

Richard as Negative Cannonbolt has almost the same appearance as Cannonbolt. However, his skin is light green, his bolts are green, his eyes are aqua, the black on his body has blue highlights, and he has the Negative Simplicitrix symbol on his head. 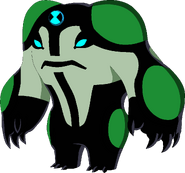 Negative Cannonbolt
Add a photo to this gallery

Retrieved from "https://thealan10adventures.fandom.com/wiki/Cannonbolt?oldid=6355"
Community content is available under CC-BY-SA unless otherwise noted.